Best Top 10 Things to do in Macedonia - Your travel guide.

The culture-rich country of Macedonia is formerly part of the Yugoslavian republic. This tiny country is tucked between the Bulgarian Balkan Peninsula, Albania, and Greece.

If you are looking to visit natural wonders, historical monuments and enjoy a vibrant culture then Macedonia is for you. There are many cultures that you can learn about while enjoying them. There is Persian, Serbian, Ottoman, Greek, Soviet, and Roman.

This is just a short list of some things that are available for the adventurer who loves to explore new fun things to do. Let us dive into one thing to do in Macedonia. So relax and have some fun. 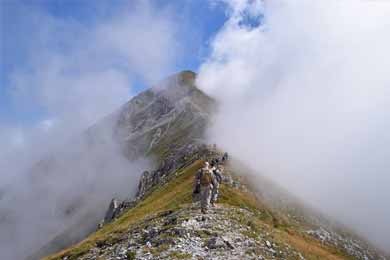 Do you like to hike? Then this is perfect for you. The 5-mile hike to the top of Mount Ljuboten can be completed in less than a day. Just do not go tumbling down the mountain. If you want an awesome view of Kosovo and Macedonia once you get to the top you will. Hiking can be exhausting. If you need to recuperate the Villa Ljuboten Mountain Resort with a simple guesthouse is perched at the treeline.

If experiencing a rich culture is the bang for you then visit Skopje. It rarely sleeps and neither will you. Skopje is a mixture of the new and the old. If you are not afraid of heights then ride a cable car to the summit of Vodno Mountain to view the 217-foot Millenium Cross.

If you are looking to add some pizazz to the experience then the fountains that are spewing water and the lights of many colors will be just the bomb for you. Alexander the Great stands downtown awaiting your arrival.

Shopping is always fun. The Old Bazaar is just across Stone Bridge. Just do not run into anyone while shopping on the narrow cobblestone streets. Rich culture abounds.

If you enjoy rock climbing then Matka Canyon is right for you. This canyon is a giant magnet for crazy rock climbers. Rock climbing to wild for you then go kayaking on the Treska River.

This river pools into Emerald Matka Lake. Enjoy underground then kayak upriver to Vrelo Cave. It is a wide, deep crack that has lit pathways and wooden stairs to many underground lakes.

Dive right into Ohrid. Ohrid is an equal part of the culture and it is an asylum of nature. Ohrid Lake is over a million years old that makes it one of the oldest lakes there is. Man oh man is that old. It has crystal clear water. It is a quaint place for taking pictures.

If old buildings are your jam then check out the Painted Mosque in Tetovo. This 15th-century wonder is a working mosque. So be respectful and take your shoes off before entering. Stinky feet no way, not for you. Modest clothing is requested here.

On the outside is a vibrant, colourful pattern of rectangular paintings that frame lattice windows lending a hint of grandeur. Does lattice make you think of a pie? Inside you will find swirling geometric artwork that spans the entire inside of the mosque, except the ceiling.

Her birthplace and other related landmarks are no longer standing. The building was built on-site where she was baptized. The building combines a museum downstairs with a chapel upstairs. Man is that some odd combination. It displays memorabilia related to the Nobel Peace Prize winner. 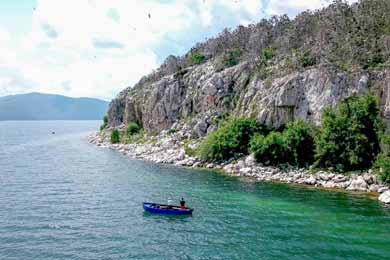 Golem Grad or better known as Snake Island. That is one creepy name. This island sits adrift on Lake Prespa. Wild tortoises, cormorants, and pelicans make their home there.

Geez, this place is old. It was a settlement that endured here from 4th-century BC to 6th-century AD. The island is part of Galičica National Park and easier to access from the eastern side of the lake.

Even creepier is that the water is filled with a high concentration of harmless water snakes. While on the island make sure to wear hiking boots as there are some poisonous land snakes on the island. Snakes, snakes everywhere and not a snake to be spared.

Kokino Observatory is fascinating to visit. It sits at the top of a hill of volcano mud. The fractured volcanic boulders were effortlessly carved to make a marking peak for the sun as it comes up during the summer and winter solstice along with the spring and autumn equinox. In the summer make sure that you use sunscreen to use and a hat to wear or you may walk away looking like a boiled lobster.

There are two terraces, one at the top and one lower down, and four thrones. The binding ceremony between the sun deity and the delegate on earth. These terraces are where the ritual took place. Imagine being bonded with the sun god, no thanks. It took place after harvest season when the energy of the sun was waning and the plants' life essence was coming to a seasonal end.

The delegate’s power was made stronger by taking in the sunlight while reunifying the delegate with the sun deity. This reunification was to help the community have peace and good crops for the following season.

This one might not be one of the most fun places to visit but it would be interesting. The Holocaust Memorial Center for the Jews of Macedonia with its mirrored glass entrance is bizarrely unwelcoming. Inside you will find a moving experience with its fascinating displays that commemorate all-but-lost Sephardic Jewish culture of North Macedonia.

A wide range of photos, English-language wall texts, with maps and videos. The exhibitions document the Jewish community's history in Balkans. It ended in World War II when 98% of Macedonian Jews perished in the Holocaust.

In the central atrium, 7,144 beads hang down that represent the individuals that died during that time. Downstairs is where you will find the original Bulgarian goods van that transported Macedonian Jews to Treblinka.

Now comes the fun part. That would be you indulging in the food and drink of the country. When it comes to meals it is a waste of time to pay attention to a clock. When you do sit to eat be prepared to have a feast.

One of the items that you will have is Burek called "salty pie". This cheese or spinach filled warm, the doughy treat is a mainstay. It is often a starter of the meal.

Burek comes with a side of Shopska salad which consists of green pepper, onion, tomato, and cucumber that is then topped with a sheep cheese that is tangy.

Now you are ready for the main meal. This portion of the meal usually consists of grilled lamb, a hearty bean stew, or peppers that are stuffed with ground meat. It could be all three. If you want to pair a wine for the meal you could do a fine wine or the homebrew of the host.

While you are in Macedonia you should know that they love to socialize. If they say to you that they want to meet for coffee. They are using code for one of several things, such as coffee. They could also be asking you to go out for beer or dinner. They may just want to hang out. When you meet someone new then you probably met a lifelong friend. 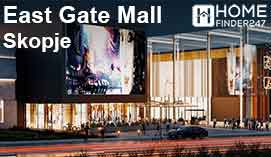