Which Costa is your favourite in Spain? Which Costa should you visit? In this overview we will discuss the options you have. This information can help you plan a holiday or a day trip.

The Spanish coast is divided into different 'costas' and each costa has its own character. Some area's a greener than others. For example, Costa Verder (meaning the green coast) is unquestionably very green. Costa Blanca in contrast is very dry and not so green. Alicante, for example has on average less than 5mm of precipitation in the month of July. The Costa Brava is popular among youngsters for its lively nightlife. 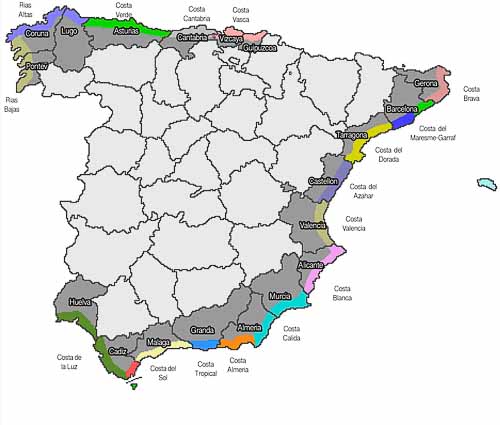 Without a doubt, the Costa Brava is most likely the most popular Costa in Spain. Brava means rough or wild in Spanish. The Costa Brava with its foothills from the Pyrenees got its name from a writer who describes the rough, wild, rocky and inhospitable character of the cost. The costal area is approximately 200 kilometers and starts at the French board and reaches as far as Blanes. There are not many sandy beaches here but rocky bays with peples and course sand. This gives the water a high visibility which is loved by scuba divers. The summers are hot and the winters are pretty mild which makes it suitable for an all year round holiday destination.

Catalonia is often considered a country within a country. This area of Spain is known for cities like Barcelona, Tarragona and Girona. The Montseny Massif and the park surrounding it is well worth a visit. You can discover Montseny by foot, by bike or horseback and reach the fantastic viewpoints. There are many activities you can do with families in Montseny.

Other popular cities and areas on the Costa Brava

The capital of the Costa Blanca is Alicante city, one of Spains popular tourist attractions (this to do in Alicante). This very versatile coastal city offers many tourist attractions and facilities. The airport El Altet is a gateway into many parts of Spain.

Just outside Alicante, between Elche and Torrevieja you can find the salt lakes which are home to flocks of flamingos. These lakes are a bird watchers paradise and cover the area from Santa Pola to Torrevieja with the salt lake of Torrevieja being the largest of them all. Along this router you will find two factories that collect the salt from the salt lakes.

North of Alicante you will find Benidorm and Villajoyosa. Benidorm is one of the largest tourist attractions along the Costa Blanca. This city has picturesque streets filled with small restaurants, bars and shops.

Jetski and scuba diving on the Costa Blanca

The warm waters fo the Costa Blanca are very suitable for watersports. In the winter months of February and March the sea temperature is just below 15 degrees Celsius. In the summer months of July, August and September the sea temperature is above 25 degrees Celsius. Very favourable conditions for sports like, scuba diving, jet-skiing,  SUP and snorkelling.

Along the Costa Blanca you can find several PADI dive centers that provide the PADI training program or a discover scuba try out. At incredible depths, some of the most bizarre animals of the sea can be discovered. Dark dwelling fish and phosphorescent jellies are seemingly just out of sight. Nonetheless you do not have to go scuba diving to enjoy the underwater life. A snorkel trip can yield just as must fun which can be done at almost any age. 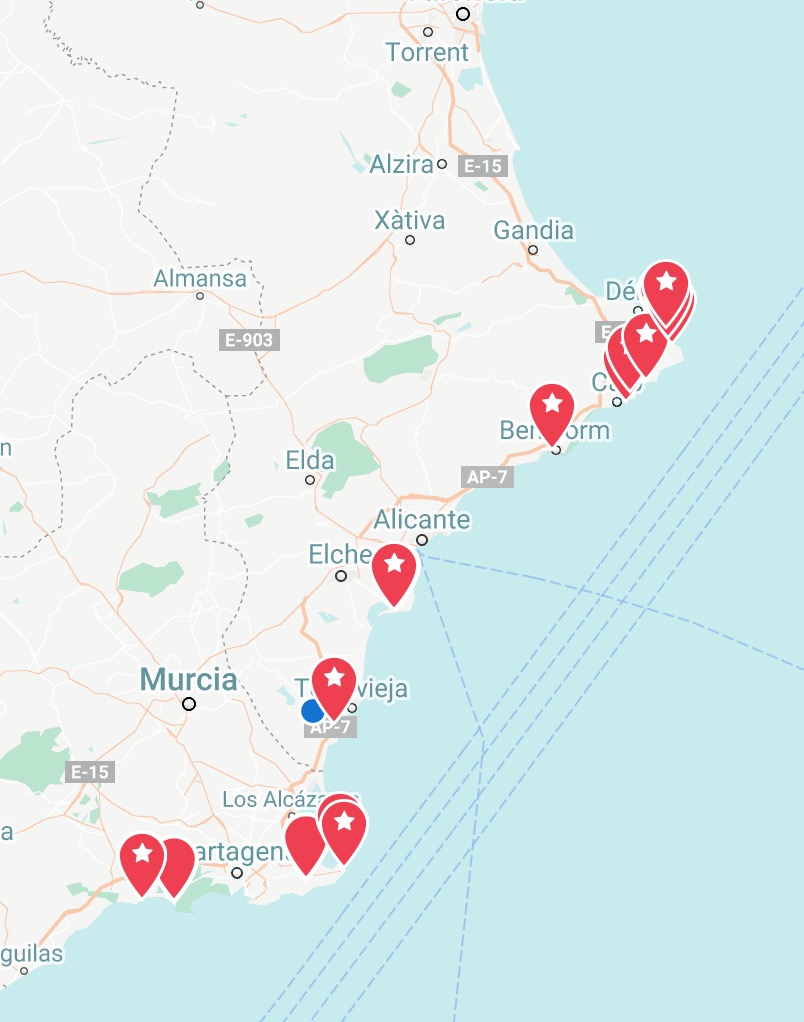 Other popular cities and areas on the Costa Blanca

Also know as the sunny coast is in the South of Spain. This part of Spain is know fo the city of Malaga, a large port city. Malaga is on of the oldest cities in the world, the birth city of Picasso. Unquestionably you must not forget to visit the Picasso museum.

The Costa del Sol starts at the village of Maro. The coastline here has many beautiful sandy beaches. The climate here is milder than on the Costa Blanca or the Costa Brava. Inland you will find many national parks

Enjoy and evening out on the Costa del Sol spotting the celebraties, visiting the quant villages with tapas restaurants and Moorish monuments. One of the most famous monuments in the South of Spain is the Alhambra Palace. This palace attracts 3 millions visitors a year. You can visit it time and time again and still see something new.

The beaches are family friendly and well equipped. Most beaches have bars, toilets, and sun lounges/parasols. Without a doubt the most popular beach is Playa la Carihuela. This beach is very clean and a joy to visit and is packed with lots of pubs, bars and restaurants. The sun lounger charges vary along this long beach so it pays off to shop around. The promenade along this beach is paved.

Other popular cities and areas on the Costa del Sol 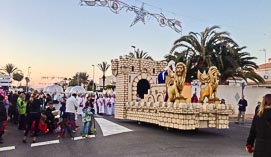 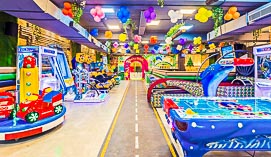 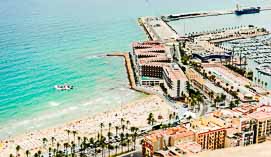