Zlatni Rat Beach Brač - One of the best beaches in Croatia

Bask Under the Warm Glow of the Sun in Croatia

Croatia is a European nation that's known for its spot close to the stunning Adriatic Sea. That's why it's not shocking that it's the location of some of the planet's most mesmerizing and picturesque beaches. Zlatni Rat Beach on the Adriatic coast is one big example. The beach is on the island of Brač which is next to the popular island of Hvar island and nearby the island Korcula and a few other Croatian islands.  If you want to soak up the rays of the sun and splash around in the turquoise blue waters at the same exact time, there aren't many options that can compete with this beautiful beach. People sometimes refer to it simply as "Golden Horn" or "Golden Cape."

If you want to have the time of your life on the Dalmation coast, then Zlatni Rat Beach can cater to you in all sorts of ways. People can swim and sunbathe on the beach. They can go for a long stroll in the soft white sands. They can even partake in a number of thrilling recreational activities like snorkeling, kayaking, scuba diving and other water sports. People who have penchants for activities like kite-surfing and standard surfing frequently head to the beach. They often head to the beach from international settings as well.

This paradise beach can come in handy for people who are interested in maximum convenience. That's because it's merely a short drive away from Bol. Bol is a pleasant town that's on Brač island. Bol is a haven for people who want to be able to savour culture, history and ambiance in general. If you want to change things up after a day or two of relaxing on the beach, going to Bol may be up your alley.

Accessing this beach is a piece of cake. People can get to Zlatni Rat Beach via vehicle. They can also get to it via the train. A compact train for tourists is accessible. It picks passengers up in half-hour intervals. This is a seasonal transportation option that's on hand to individuals during the summer. That's when the beach is at its most bustling, and understandably so. From the mainland you can take one of the ferries that will take you to the island.

The turquoise waters that are close to this sandy beach are highly refreshing. They're often-transparent as the result of a Hvar Channel current.

Zlatni Rat is just a few steps away from an abundance of enchanting pine trees. This is where people come across what's left of a "villa rustica" from ancient Roman times. Villa rusticas, in brief, are villas that encapsulated rural locales. The villa by the beach has its own swimming pool.

People who want to relish Mediterranean glory often make the decision to head to this beach in Croatia. It's not only a big spot among adults. It's also a favourite among families with children. With Brač island being so close to the mainland it could also be an ideal day trip, take the ferry in the morning and enjoy the island, then have lunch on a terrace at one of the many cafes the island has, some near the seaside to enjoy the sea view. Then head to the sand beach to relax with some sunbathing at the beach, and at the end of the day view one of the most breathtaking sunsets.

If you visit Croatia as a tourist then we hope we convinced you that Zlatni Beach is one of the best places to visit from the many beach destinations you can choose from. Please let us know if you enjoyed this beautiful beach. 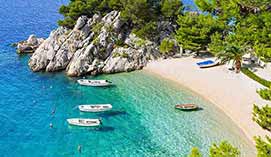 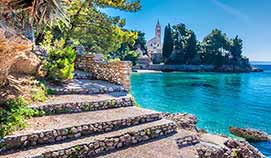 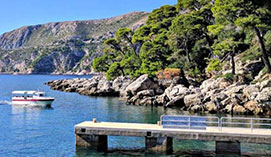 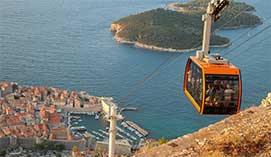